Due to the room limitation we have to limit the number of players. If you want to register please write us first.

In spring 2017 the Paris Videau club and the London Ealing club started an exchange, which was repeated in 2018.

After two years of successful meeting we decided to see bigger and invite several clubs we have personal ties with and have an even larger backgammon feast !

The events will spread over 3 days of total Backgammon !  Friday May 31st (team events), saturday and Sunday June 1st and 2nd (individual events)

Ideally each participating city is asked to assemble 2 teams of five players (1 team intermediate, and 1 team advanced), if you can't gather that many interested players we can make fused teams with several cities.

More players than just 10 per city can come to play in the individual tournament.

The team Event (advanced (A) and intermediate (B)) played on Day 1.

Each city plays against each other city. When two cities meet, the players are paired randomly. Matches are played up to 7 pts.

With 6 Cities, this event lasts the duration of 5 matches and can fit on Day 1.

The individual tournaments (1 intermediate tournament and 1 advanced tournament) are played on Day 2 and Day 3, quadruple elimination,

The other players enter a consolation.

In paris the Air Bnb solution is particularly encouraged, even more if you book a big flat for several team mates. You will be able to enjoy Paris in a very special way.

Otherwise, we have contacted several hotel to get you special deals. SPECIFY THAT YOU ARE COMING FOR THE BACKGAMMON TOURNAMENT

here is the map with a selection of affordable hotels. MAP

We listed below the most interesting deals. we will update this list as the deals are confirmed with the hotels. 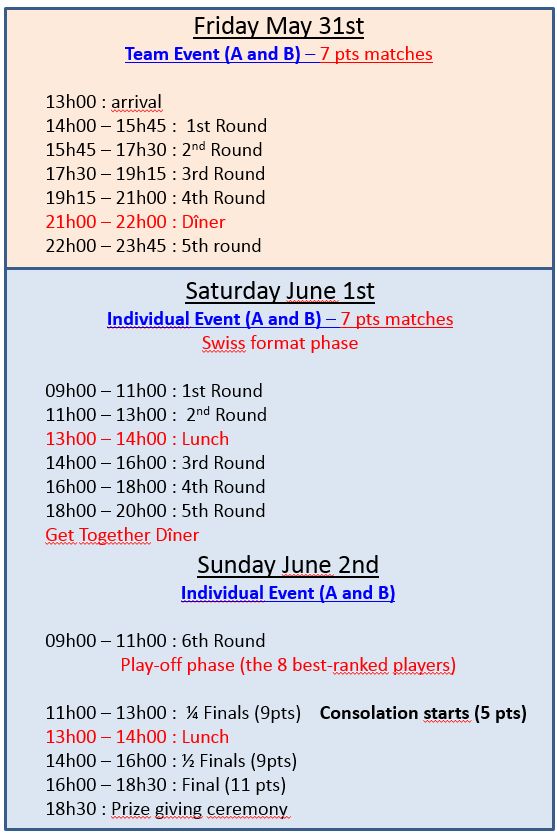